Pastry science #1 – What are sugars? 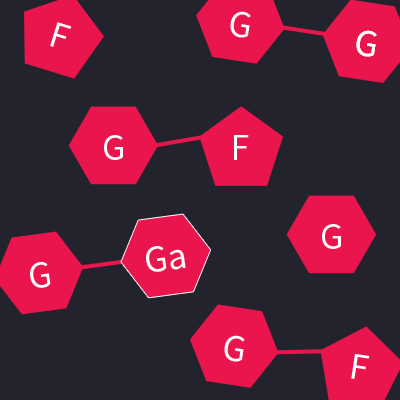 There is one ingredient that is present in all the recipes of this blog: sugar.

Since this ingredient is so important in pastry, I thought it was well time to learn more about it. So let’s get serious with some science! 😛

With the word “sugars” (plural), chemists usually refer to sweet carbohydrates. When we informally say “sugar” (singular) we usually refer to a specific molecule that chemists call “sucrose“. Granulated sugar is nothing else than sucrose.

The molecules of all sugars, including sucrose, are composed of only three atoms: carbon (C), hydrogen (H) and oxygen (O).

A first classification of sugars

Sugars can be classified based on their complexity:

So, to simplify very badly, in pastry it almost all comes down to glucose and fructose. Any type of  sugar you use will most likely contain either glucose or fructose or both.

Here is a recap of the main mono- and disaccharides and the way they are usually represented (hexagons and pentagons): 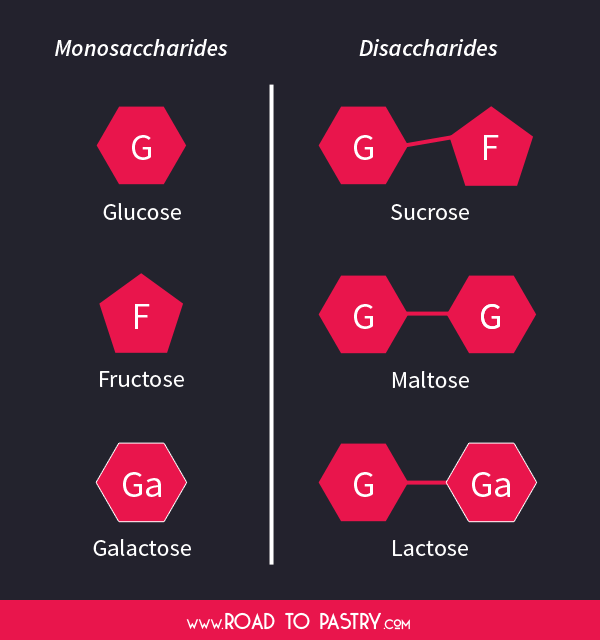 Nutritionally speaking, all carbs, and therefore all sugars, have the same amount of calories: 4kcal per gram. There is no calorie-free sugar, get over it! 🙂 (I know what you’re thinking, but stevia is a sweetener, not a sugar).

The number of calories defines how much energy a specific ingredient or product will bring to our cells (note: even if quantities and calories are the same for two different sugars, their level of sweetness could be different).

What happens “behind the scenes” is that all carbs we ingest are transformed into monosaccharides (and then into glucose).

Our body, though, doesn’t react the same way with all sugars: for example, starches and fibers are both polysaccharides made of thousands of monosaccharides joined together. Their impact on our metabolism also lies in the difference in the way their molecules are joined together.

Monosaccharides in starches are joined together through alpha-linkages: without too many technical details, these linkages can be easily broken down by our enzymes during the digestion. Foods rich in starch, like white bread, can therefore be quickly digested, releasing a consistent quantity of glucose in our blood. These foods are said to have a high glycemic index.

On the other side, monosaccharides molecules in fibers are joined together through beta bonds, which our body cannot break down. When you eat foods with fiber (for example vegetables and fruits), the indigestible beta bonds slow down the release of glucose in our blood. These foods are said to have a lower glycemic index (and that’s why we consider them healthier).

To complete the picture, insulin is produced by the pancreas and allows muscles and fat cells in our body to let glucose in and start the conversion into energy. If cells become less responsive to insulin, the level of sugar in the blood fails to decrease. This might lead to a disease called metabolic syndrome, which is believed to degenerate in type II diabetes.

To summarize: not all sugars are the same and we should indeed prefer those with a lower glycemic index, but in terms of calories, sugar is sugar, and an excessive consumption might have negative effects on health..